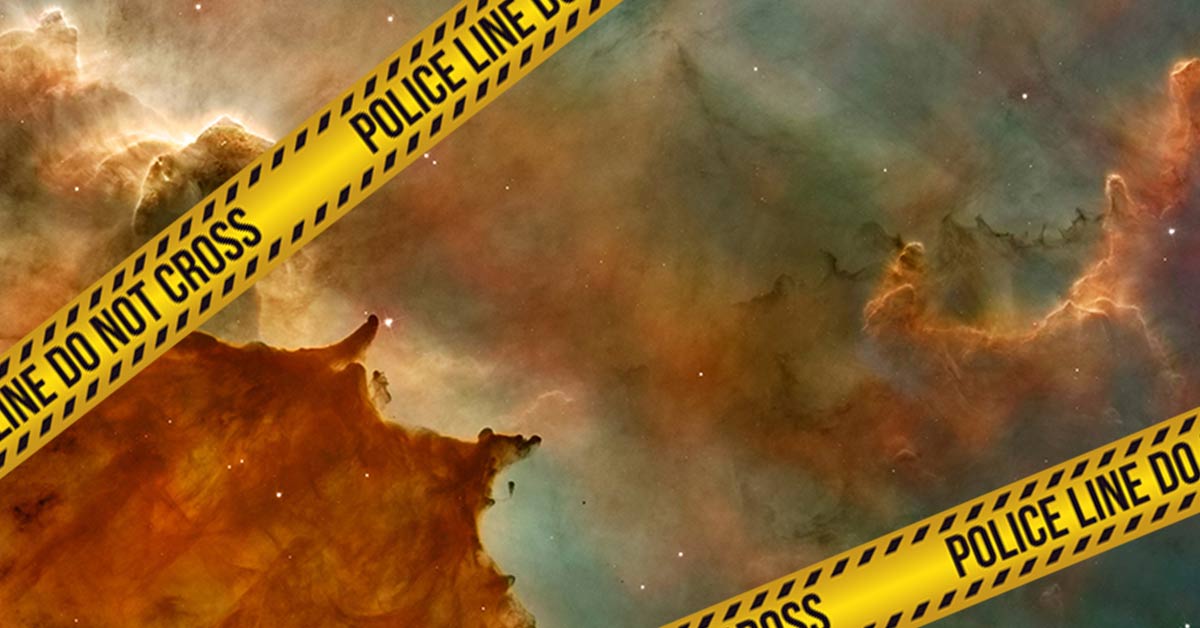 The Universe is a Crime Scene

I’m conflicted. Most scientists tingle with suspicion at any hypothesis about the natural world that even vaguely smells like “intelligent design.” I don’t blame them! Christian thinkers have historically embarrassed themselves with their eagerness to find God everywhere. Wherever you look in history, whenever some ambiguous phenomenon or some unexplained thing perplexes humanity, there you also find, most of the time, a mob of excitable Christians tripping over each other as they rush to the scene, fingers pointing, spouting their impetuous solution:

But, of course, those unexplained things are eventually explained, clearly and naturally, without any need for supernatural involvement. No, God does not lift the sun every morning, and the boy thrown to the floor in fits of convulsive trembling is not possessed by a demon. Each hasty God-hypothesis gets explained away by science, leaving the God hypothesis less credible with each scientific success.

Christians are perseverant, though. They cling to preposterous views because they think their faith relies on it. If the earth was created just 6,000 years ago, you ask, how do you explain dinosaur bones dated at 65 million years old? With perfectly straight faces, I’ve seen these Christians respond: “God placed those bones there and made them to look old.”

Pay close attention to the implication, here: rather than relenting on even their most absurd and theologically irrelevant beliefs, these Christians will happily accept a deceptive God.

(1) Detecting fraud. Researchers face enormous temptation to give fake results to their research. Maybe their research will facilitate the sale of a billion dollar drug. Or maybe their research could lead to a cushy university job. Or maybe they just want to impress some steamy-eyed love interest. Whatever the motivation, research fraud happens. It turns out, though, that the scientific community is fairly good at detecting fraudulent research. Fraud detection asks the question: Are these results natural? Or, are these results designed to convince us they are real even though they are not? Detecting fraudulent research IS detecting design.

(2) Forensic science. You walk into a room and find your housekeeper, Gretchen, laying face down on the kitchen table with a large spear lodged deep in her back and you see her blood all over the table, the linoleum floor, and the kitchen cabinets. Police are called. Investigators arrive. Pictures are taken. Notes are written. Professionals work the room, collecting fingerprints, snapping pictures, interviewing neighbors, trying to determine if Gretchen somehow accidentally impaled herself with the spear, or if, rather, Gretchen was murdered. To put it another way, they seek to determine if her death was an accident or if it was the intended result of someone else’s plan (design).

The dilemma for naturalists is this: If design-detection is such a fundamental part of how science operates, how can we meaningfully say that it shouldn’t be a part of science? And the further question: If we can confidently detect design when we investigate research results, bloody kitchens, and waves in space, why are we not allowed to apply those same scientific principles to the universe itself? So far, I haven’t found a good reason to disallow design-detection other than brash philosophical presupposition.

Dawkins argues in The God Delusion that it is pointless to try to detect design in the universe because even successful design detection simply pushes the question back a level. That is, even if we were able to determine that there was a mind behind the universe, well, we would still be left with the question of: what intelligence is responsible for this intelligent mind? Or, in other words: where did God come from?

To be clear, all I am arguing is that design-detection is an essential part of doing science, and thus should not be excluded from it in any way. I am not arguing that design detection leads inevitably to an intelligent designer (although I happen to think it does). Nor am I arguing that we should teach intelligent design in our public schools. That’s a separate issue (I happen to think it shouldn’t be taught there). All I am arguing is that, as embarrassing as they sometimes are, the intelligent design proponents are right about at least one thing: Design detection is a totally appropriate function of science.

Posted in Dan Kent Can Write